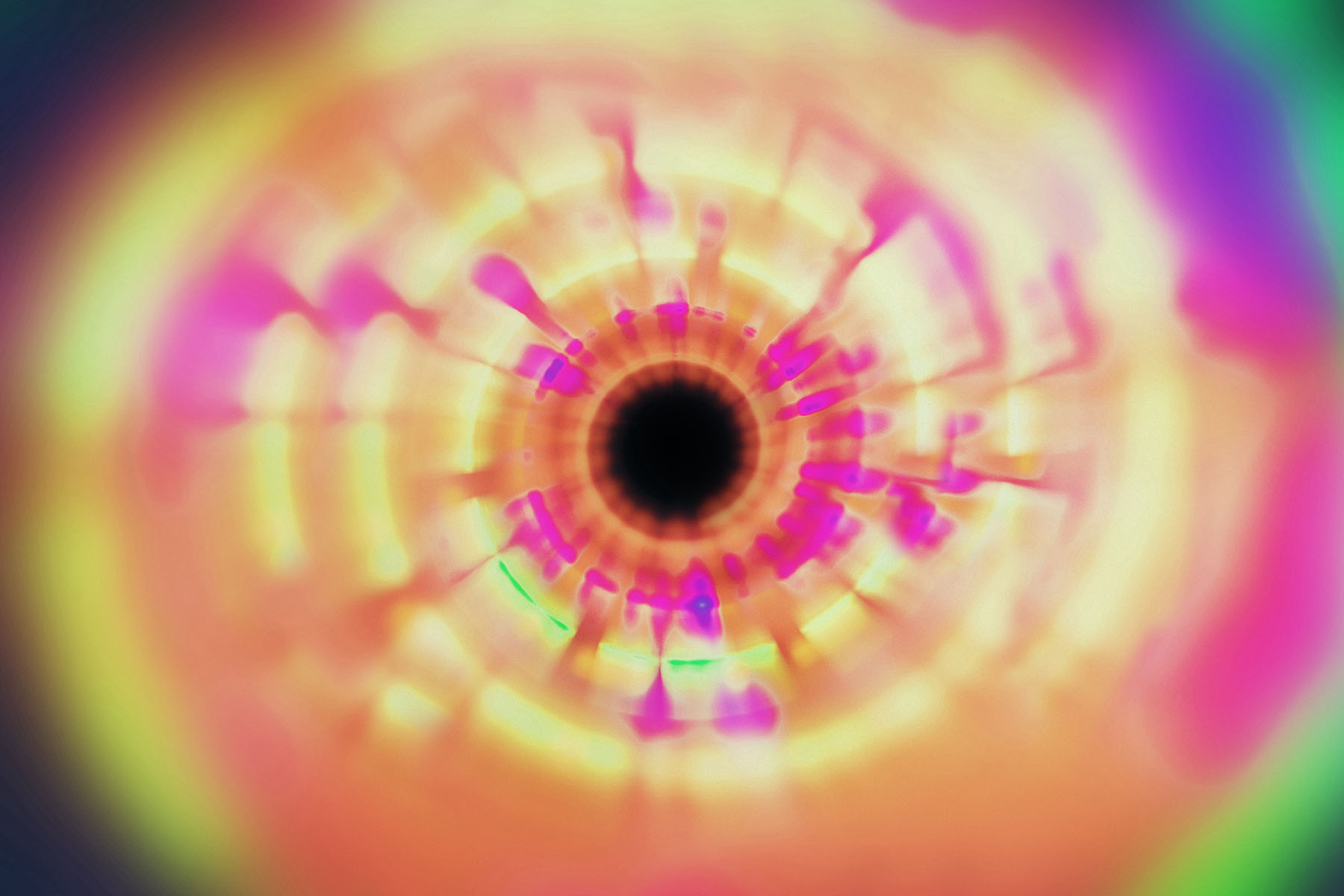 Sometime back in the hazy days of the early 2000s I was stumbling around a music festival when a strange-looking stall caught my eye. Rather than peddling the usual festival crap or grease soaked rat burgers, this barely occupied marquee promised something different. If you strapped yourself into the weird hybrid dentist chair with a VR style headset, you would be whisked away on a psychedelic journey without the need for mind altering substances. A miracle technology that used sound and light to deliver transcendence. I bravely offered up my money and put myself forward, excited to become one with the machine and experience something magical.

10 long minutes and £20 later, I walked away disappointed, cemented in the knowledge that no technology could ever replace the real thing. Despite years of festival attendance, I never saw the stall again, leading me to believe it went the way of the ‘oxygen bars’ that pumped you full of fresh air for a fiver. So when a few weeks ago I saw a new smartphone app claiming it could create a psychedelic like experience using nothing more than sound and light I raised a knowing eyebrow and filled it under mumbo jumbo.

Lumenate is the brainchild of founders Tom Galea and Jay Conlon. The pair met while studying engineering at the University of Liverpool, going on to work together at Jaguar Land Rover, designing futuristic concept vehicles unlikely to ever see the real world. After a few years of corporate hustle, they packed in the day job in search of enlightenment, embarking on the sort of global explorations that lead to meaningful conversations with strangers you’d have no chance of meeting at the water cooler.

These experiences led them to question what freedom and fulfilment mean to people in today’s modern world. Fueled by this burning question, they returned to the UK determined to launch a company that would focus on the idea of “inspiring change in people’s lives through subconscious exploration.”

Initially, the company focused on using a light and sound system in group experiences that would guide people into a state where subconscious exploration is possible. However, as with many stories of our time, the cruelty of Covid-19 put a halt to proceedings after just one test event. Undeterred, Jay & Tom took on the challenge of developing an app themselves that would replicate the experience via a smartphone, meaning they had to learn everything from music production to coding. In April 2021, the Lumenate app was released to the world, but does it work?

My decision to try Lumenate was an incredibly spontaneous one. For reasons known only to my subconscious, I had a sudden urge to search it out on a quiet Wednesday in the office. I’d previously seen a couple of social posts on the app linking to reviews, but had skimmed past them due to my initial cynicism. In the interest of going into my trip unbiased, I decided to skip the views of other writers before giving it a go and take the plunge without any expectations. Science.

The signup process for the app is simple and unassuming. After confirming a few expected medical disclaimers users are given the opportunity to begin with an introductory 5 minute guided experience. An opportunity I was ready to embrace.

The first session on the app suggests you find a comfortable, quiet dark space and use headphones or good quality speakers. It also explains that research has shown alcohol reduces the intensity and impact. Being at work, being sober wasn’t too much of an issue, but the best space I could find was an insulated phone booth normally reserved for hot sales chat. Doing my best to create a personal nirvana, I unscrewed the lightbulb, making it dark enough for a trial run, placed my phone on the desk in front of me, donned my headphones, rested my head on the desk, hit play and closed my eyes.

A calming voice over a typically trippy soundtrack encourages you to get comfy and to take some deep breaths to begin. After a moments pause, the flashing light starts.

The music makes it easy for you to relax into the experience. The guide prompts you to adjust the distance between the light and your eyes, a means of optimising the process, before explaining the physical sensations you may experience and giving more information on the science behind the magic, and how best to enjoy it.

At this point, I had the feeling I was listening to some kind of new-age flight safety briefing. Thoughts of patronising yogis filled my mind. But just as my inner sceptic began to roll my covered eyes, I suddenly found myself seeing rapidly dancing geometric patterns. Bright red spheres flashed and cycled on the back of my eyelids seemingly in collusion with the music. In the remaining moments of my 5 minute guided introduction, I was immersed in a range of changing visuals and opened my eyes with a surprised smile on my face.

Amazed at this technological witchcraft, I jumped straight back into a 10 minute ‘open exploration’ keen to see more. Straight away, the patterns and movements returned. I’m pretty awful at meditation, I’m the sort of person who can keep himself awake thinking about thinking, but the thoughtless minutes flew by. As the musical soundtrack came to a comfortable conclusion, the patterns slowly faded in correspondence with the reduction of oscillations from the light of my phone. I opened my eyes and returned to the real world, acutely aware that time had briefly stopped existing, I’d totally forgotten I was huddled awkwardly into an office phone box. I’d had a mild dissociative experience not far away from ketamine. Lumenate is no mumbo jumbo, it means psychedelic business.

Join the Lumenate Facebook community and you’ll find nothing but glowing reviews, positive feedback and eager explorers asking questions and sharing tips. Curious to understand if this response was expected, I contacted co-founder Tom Galea to ask if they’d anticipated the enthusiasm? “We’ve honestly been blown away by the reaction so far and the range of people that have reported enjoying and getting value from the app. It seems that the world was more ready than we expected for our take on subconscious exploration!”

Tom may be onto something here. The timing of the app couldn’t be better, the world is seemingly riding the wave of a new revolution in psychedelics and conscious awareness. As we simultaneously seek to heal the wounds of a global pandemic and cling onto the connections and community spirit that lockdowns and loss inspired, it seems that adversity turned into serendipity for Lumenate. Indeed, they have gained the support and backing of some impressive names. Beckley Waves, the investment arm of the Beckley Foundation made their first investment in the company, followed a few months later by Rosamund Pike, who also joined as creative director.

Spurred on by the overwhelmingly positive reaction, Gaela told me the company was moving forward at pace: “We’ve been working hard on getting some new content ready for the app at the moment which should improve the experience hugely with new music, scripts written by a leading psychedelic therapy researcher and new voices. We’re also hiring a team to allow us to develop new features and ideas so if you are or you know a brilliant product designer, iOS or Android full stack developer or community manager, check out our site and drop us an email! We’ve got other huge plans ahead too, but you’ll have to come back again another time to hear those… It’s going to be a very exciting few years ahead!”

Intrigued? Learn more about the science and try the app for yourself: https://lumenategrowth.com/ 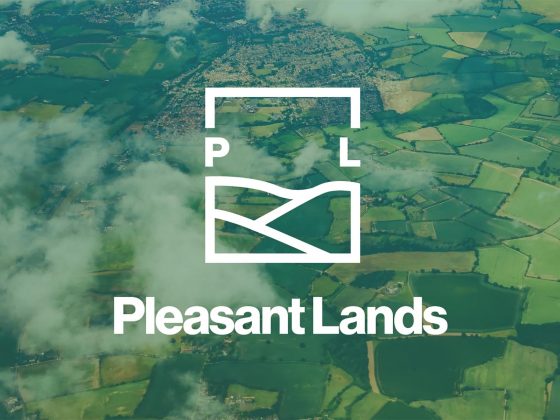 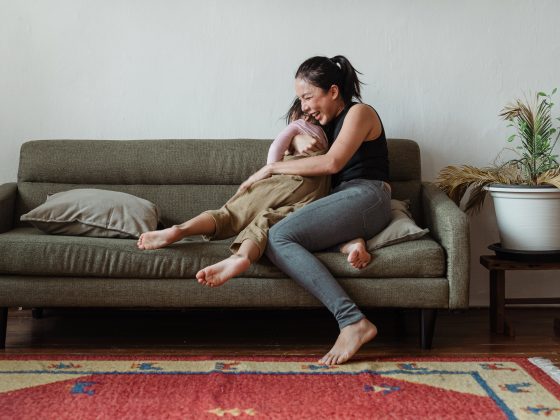 Stripping back the stigma: Meet the Mums who use cannabis