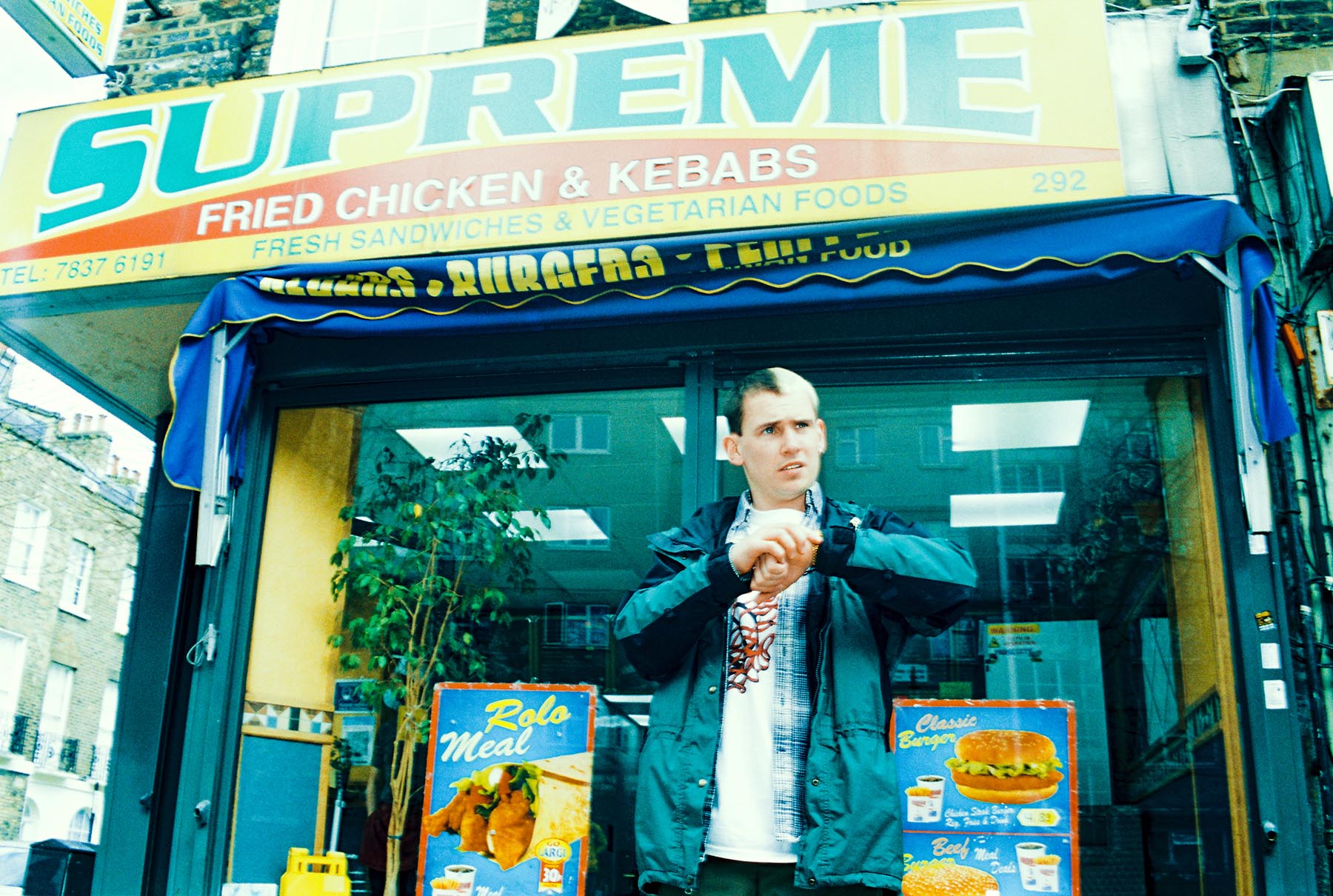 Dublin rapper Kojaque is smiling in the face of darkness

Learning how to relax when you live inside a tiny box room with extortionate rent (and a likely mould problem) in a sprawling urban metropolis can be difficult, but Dublin rapper Kojaque’s hazy, nocturnal confessionals succeed in helping the city’s lost feel found.

Having grown up in the Cabra district of the Irish capital in a working-class family, the artist knows a thing or two about how gentrification is widening the gap between the rich and the poor. Yet he’s committed to writing anthems that make those caught up in this predicament feel less alone. “Because of the housing crisis it’s not unusual to be well into your 30s or 40s and still live with your ma,” Kojaque explains.

“Even hard working people like teachers have been priced out of buying and renting. I rap [on “Schmelly”] that I’m “in the box room until the box pushes daisies” because in Dublin you’re probably going to live and die in your teenage bedroom. That’s the people I am talking to. I want to give them an escape.”

Although Kojaque’s rapid-fire raps routinely touch on feeling boxed in by yuppies with triple-barrelled surnames, they are underpinned by a sardonic wit (“In church praying for the WiFi code” he joked on his 2017 breakout single) and a resilience (“Couldn’t tell my ass from my elbow, but fuck it I tried” he raps on a new two-part anthem, Black Sheep, that taps into grappling with the suicide of his father) that makes what were, once, dire odds feel reversible. “I used to think it was impossible to make a living off your art,” he adds, “but here I am.”

Kojaque’s brilliant upcoming debut album, Town’s Dead, is a concept rap record that unfolds across Dublin on a New York’s Eve night, with a group of friends involved in a hilarious love triangle and a mad dash around the City to find something to do on an evening that is threatening to underwhelm. Inspired by cinematic storytelling rap opuses like Kendrick Lamar’s good kid, m.A.A.d city and The Street’s A Grand Don’t Come For Free, Kojaque hopes to add a shot of vibrancy to those late night walks to meet your weed dealer in a dodgy dark alleyway that reeks of piss.

“Walking home or being on the bus late at night is when I really listen to music. When you’re going from one place to another, music can be like a soundtrack to your own movie. I wanted Town’s Dead to give you that same feeling,” he says. “It’s an accurate little photograph of Dublin and how I see it. There’s piss in the streets, people with nowhere to go, a lack of jobs, no housing, lots of dancing and laughs; just everything that’s built into the fabric of this city.”

Just like Dublin itself, Town’s Dead is a melting pot of influences, with the music energetically tapping into rap, funk, R&B, punk, pop and electronic. One second you’re in the middle of what feels like a killer freestyle cypher at a mate’s house (Jinty Boy Blues), the next it’s like you’ve just dropped 2CB at a rave (Heartbreak) that is bluntly interrupted by a sad howl from a saxophone obviously indebted to all those golden-era A Tribe Called Quest jazz samples.

“There’s a lot of different sounds but they’re all harmonious,” claims Kojaque, who succeeds in finding clarity amid dark, chaotic soundscapes in a way that, at points, recalls Slowthai’s performance on Nothing Great About Britain. “If you pressed shuffle on my iPod then this album is exactly what it would sound like.”

Town’s Dead should solidify Kojaque as a crossover star, with the artist’s vivid lyricism and nasally yet smooth vocals so good that the Irish accent never overwhelms. It’s a strength, not a weakness, and Kojaque says he’s now ready to normalise the Irish accent in wider mainstream rap. “People doubt you until you are successful and then they want to lick your fucking arse,” he laughs. “I am just getting started.”

Ahead of the release of Town’s Dead, leafie caught up with the breakout star to chat about cannabis legalisation, “sea-hash”, wearing dresses, overcoming accent anxiety, and his big plans for the future. The following chat has been edited and condensed for clarity.

Town’s Dead is a real tribute to Dublin, but obviously from the lens of its poor. We’ve seen a lot of rappers rising up from your city recently… why is it such a hotbed for talent?

I guess it is easy to feel voiceless in Dublin. Sometimes I feel like fucking Mugatu in Zoolander, because it’s like: am I taking crazy pills here!? How the hell are you not seeing all this [inequality], too? I guess that frustration breeds a lot of good art. For Dubliners, creating art is sometimes the only way you can get your message across. Creating music means getting your own agency back and being an independent person. It is easy to fall into hopelessness. But if anything can provide a catalyst for change then I think it is going to be music and art.

Have you found similarities with Dublin since moving to avocado-toast capital Hackney?

It has so many of the same problems, but all the crooked landlords in London make me feel right at home.

On “Casio” you talk about having doubts about rapping in your own accent. What changed?

I didn’t see a lot of people from a mainstream point of view who sounded like me. I was self-conscious of it at first, but now I see it’s what separates me from the others. My friends and family believed in me when I did not believe in myself, and I now look at the accent as a positive. So much of my life was occupied with self-doubt and second guessing, but I’ve learned that those who appear the strongest are usually just putting up a front or a veneer of strength. We’re all working it out as we go.

I think we’re at a point in history where people are realising that unique accents can result in some sick music. People want to hear things they’ve not heard before. I am sure they said the same shit with Bob Dylan and complained that he had this weird ass twangy voice, but look at him now. Can an Irish rapper be one of the biggest artists in the world? Yes indeed, my friend.

Can an Irish rapper be one of the biggest artists in the world? Yes indeed, my friend.

This record taps a lot into the angst of feeling poor and ignored, but you maintain your sense of humour too, rapping about being so stoned you can visualise the colours of the Coral Reef. Why is maintaining that sense of humour so important?

Humour is a massive part of my life. I think it is a bit disingenuous to omit humour from your music. Some people do as they want to be taken seriously, but I believe you can take the piss and still be serious.

That lyric sounded like the result of an epic smoking session. Are you surprised weed hasn’t been legalised yet in the UK and Ireland?

I guess there’s such antiquated views on what weed is, what it does, and why people do it. So much of it stems from racism, as western governments like to lock up [certain] people who smoke it. In my opinion you legalise it, tax it, and then bring money into the economy. You let people know what they are smoking, as it doesn’t make any sense going out smoking any old shit off the street. We should know what strain it is, and how it is grown. When you go into an off-license and buy booze, it tells you the percentage of alcohol so it’s all safe. It is ridiculous that it isn’t the same for weed, like. It’s the reason I gave up.

How do you mean?

I was just tired of not knowing what I was smoking, so I stopped. It’s hard to get good stuff in Dublin too. I remember this story of a block of hash that washed up on shore in Wexford and all these lads cut it and sold it as “Sea Hash”. They were like: “It’s great fooking’ hash! It has a salty taste to it.” That’s the type of shit you are probably going to end up smoking in Ireland [laughs].

I love that you don’t follow a traditional script as a male rapper. The fact you wore a dress in the Flu Shot music video felt important, while the name of your label, Soft Boy, seems to be a rejection of conventional masculinity. Why did you put the dress on?

It was just like shut the fuck up, what are you really worried about? It’s a piece of fucking linen that’s cut a different way! It is mad that it is widely accepted that only fellas can wear trousers and women must wear dresses. It should be the other way round, to be honest.

Dresses are breezy as fuck…

Breezy, and very comfortable. There’s a lot of room for everything, you know? The Scottish had it right with their kilts. William Wallace must have felt great with all that breeze.

Where do you see yourself in the future? What’s the long term goal here?

I want to be at the Grammys smoking hash with Hozier. That would be nice. I guess I get asked a lot about politics, but look: I don’t know how to fix that. I am just a scruffy little youth with an art degree. I make art about how I feel and try to be a good person while doing it. That’s all, really.

Thomas Hobbs is a culture, music, film and business journalist who writes for titles such as the Financial Times, Guardian, BBC, Dazed, Telegraph, Independent, Pitchfork and VICE. 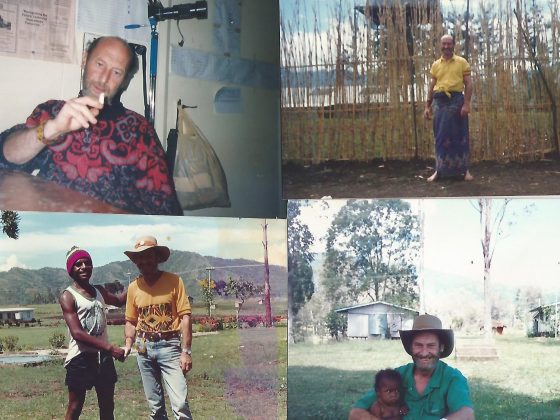 Stripping back the stigma – Tony Bevington