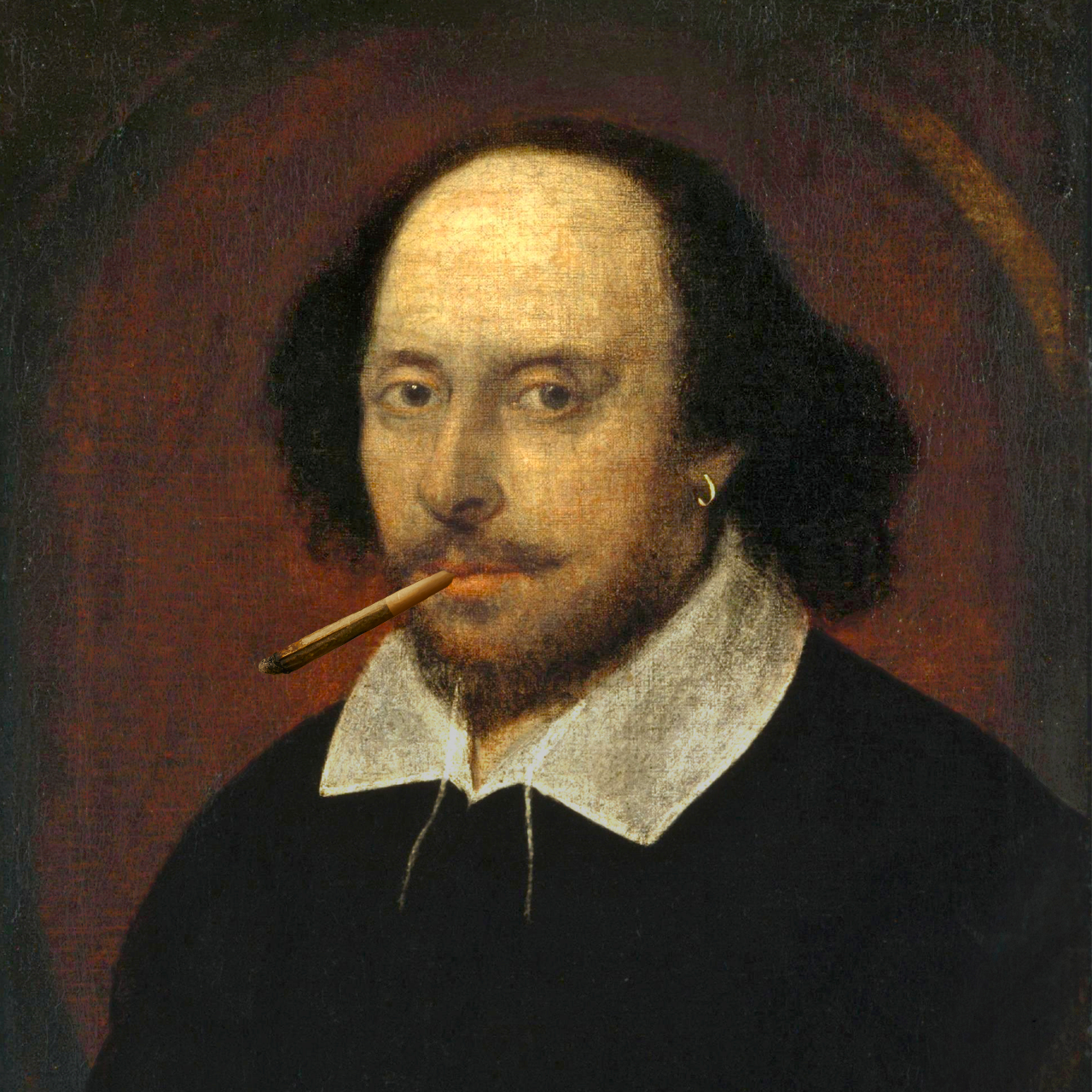 All sorts of assumptions have been made about William Shakespeare’s mysterious life. Some believe he was secretly catholic. Others think that he was gay. But more recent speculation implies that there was a more herbal influence behind the playwright’s imaginative verse.

Despite sparking considerable debate amongst historians, there is actually some evidence – both historical and scientific – to support this idea. Was the Bard of Avon really a stoner? Drugs may have fueled his creative genius, but we may never truly know the answer.

Back in 2001, a group of South African researchers unearthed numerous fragments of 400-year-old clay pipes in the hometown of William Shakespeare, Stratford-upon-Avon. Several samples were even found in Shakespeare’s own garden.

The team, led by anthropologist Francis Thackeray, used chromatography-mass spectrometry to identify the chemical signature of the pipes’ contents. Their analysis identified the presence of nicotine and Peruvian cocaine, with 4 of the pipes found in Shakespeare’s garden containing a substance reminiscent of cannabis.

At face value, this investigation provides some pretty substantial evidence for Shakespeare’s stoner habits. But when we really dig into the study’s findings, there appears to be a major flaw: the actual evidence for the presence of cannabis is very weak.

The authors of the study write that “residues of cannabis are suggested but not proven.” They then state that this is likely due to “difficulties associated with the effects of heating, and problems in identifying traces of cannabinoids in old samples.” So, the traces found may have been indicative of cannabis compounds but, from this study alone, it is far too presumptuous to conclude that Shakespeare smoked weed.

Fourteen years later, in an issue of Country Life magazine, author Mark Griffiths revived the public’s interest in the drug habits of the Bard. Griffiths referenced John Gerard’s Herball, a botanical book that depicts the engravings of four men on its title page, published in 1597.

Gerard’s book explores the various types of “tobacco” brought to Europe in the times of Elizabethan England. In his article, Griffiths proposed that “the fourth man” on the title page is William Shakespeare. It’s an uncertain assumption – and a tenuous connection – but this provides an additional indication that Shakespeare may have dabbled in the herbal world.

This led Thackeray to re-evaluate the evidence in an updated paper, in which he addresses Griffith’s theory. Thackery told The Atlantic in 2015 that “he has since revisited the data and believes the evidence for cannabis to be more substantial than before.”

Despite this renewed interest in the ‘Shakespeare stoner’ theory, one major limitation remains – that being, there is minimal evidence to suggest that Shakespeare was the one smoking these pipes. Many Shakespearean scholars, therefore, believe that Thackeray’s evidence is circumstantial, at best.

With this growing public interest in the playwright’s drug consumption, scholars have instead turned to the sonnets of Shakespeare himself to find any cannabis references in his writing. Whilst some believe that the creative genius of A Midsummer Night’s Dream is, itself, sufficient evidence for his use of mind-altering substances, historians are in search of more robust, explicit evidence.

The most heavily-cited reference to drug use in Shakespeare’s work is Sonnet 76, which reads:

Why with the time do I not glance aside

To new-found methods, and to compounds strange?

Why write I still all one, ever the same,

And keep invention in a noted weed…

Thackeray interprets this as Shakespeare’s admission to his preference for cannabis over  “compounds strange”, which Thackeray believes to mean cocaine – ​​a substance that, according to his analysis, was not present in the garden of Shakespeare.

Although “a noted weed” could be interpreted as an explicit reference to the drug, this may not actually be the case. The term “weed” in place for cannabis was thought to originate later than in Shakespearian times, during the 20th century. Whilst the poet may have been referring to weed as we know it, this isn’t entirely clear.

With eager compounds we our palate urge

It is believed that “compounds” are, again, a reference to drugs. This phrase is therefore suggested to signify a medicinal cure for loss of appetite. With ‘the munchies’ being a notorious side effect of smoking weed, and cannabis touted as an effective appetite stimulant, this is a plausible interpretation.

Finally, it is even thought that Shakespeare also referenced cannabis in Romeo & Juliet:

And hereabouts he dwells—which late I noted

In tattered weeds, with overwhelming brows,

Culling of simples. Meagre were his looks,

Sharp misery had worn him to the bones

This, translated into modern text, reads as “I remember a pharmacist who lives nearby. I remember he wears shabby clothes and has bushy eyebrows. He makes drugs from herbs.” Shakespeare’s references to herbal concoctions aren’t entirely unusual. The Elizabethan era, after all, was certainly an experimental time for medicine, with plants accepted as some of the most powerful remedies.

But Shakespeare’s writing is open to interpretation, and many literary experts remain sceptical of these alleged cannabis connotations. Ann Donnelly, the curator of the Shakespeare Birthplace Trust museum, remains doubtful. “People love to come up with reasons for saying Shakespeare was not a genius. I don’t think there’s any proof that he was helped in any way by taking narcotic substances,” Donnelly claims.

The mystery of Shakespeare’s identity

Surprisingly little is known about the Bard of Avon’s life. Other than his birthplace, his career in London, and his retirement in London, it has been challenging for historians to piece together the details of his life. Even records of his family and children are scarce, and thus, Shakespeare remains an elusive figure in history.

It, therefore, comes as no surprise that emerging theories about Shakespeare’s life – his religion, sexuality, and now, his suspected drug use – capture the attention of the public. The world is desperate to understand the creative inspiration behind one of the world’s greatest playwrights.

Shakespeare’s work may allude to his use of drugs, but the existing evidence is hardly incriminating. Very few solid conclusions about his personal life can be drawn from his writing. He was a storyteller, after all.

Was Shakespeare a stoner? Maybe. But unless sturdier evidence presents itself, we can only speculate.