“Sleepless nights, endless stress, and the monthly merry-go-round of shit.” If you’ve ever run your own business, you will know it can be an endurance challenge at the best of times, and lead to burnout at worst. But for two enterprising friends, the slog of running a business led to the invention of a purpose-driven CBD brand.

After leaving university together, Ian and Sam, the founders of CBDiablo, found themselves running a profitable but challenging digital marketing agency. It was thanks to this agency that the pair became passionate about CBD, but not before a perception shift. While they enjoyed working on the client and generating results, they had some initial misgivings.

“We learned a lot about CBD, cannabis, and the culture by writing and reading about the subject every day,” says Ian. “From a nark hall assistant at University who always thought cannabis was harmful, I broke down all of my preconceptions and started to really love the nuance of the plant.”

From a nark hall assistant at University who always thought cannabis was harmful, I broke down all of my preconceptions and started to really love the nuance of the plant.

It was thanks to this change in attitude, and the dreaded burnout from the “digital marketing hamster wheel” that the CBD brand was formed. “We decided that we needed to leave the digital marketing industry and pursue a business focused around our newfound passion for CBD. We had lots of ideas that we’d floated with the client which they didn’t want to try, so we thought we’d try them ourselves. We made the hard decision to let the client know our plans and we started the foundations of CBDiablo.”

It’s clear to see the duo have come at the industry with a unique eye. Shunning the traditional green and white medical-style branding, instead opting for a playful, rebellious and sometimes cheeky approach, with an ethos styled around the battle of good vs evil. “The idea originally was a play on the concepts that surround cannabis itself,” Ian tells us. “Every brand we saw seemed to be a little scared of the cannabis part of CBD, but we leaned into it and embraced the negative connotations; challenging them head-on. We knew that it would put lots of people off but we knew that lots of people would love it.”

The battle of good vs evil isn’t just a cheap marketing gimmick for the brand, it’s also a driving force for success. Ian and Sam both agreed that they wanted to wake up in the morning feeling like they had more of a reason to work hard, they wanted a company more about having fun and living a fulfilled existence than just making a quick buck. As a result, the founders made a pledge to donate 20% of profits from CBDiablo to the mental health charity CALMzone. It’s a charity close to both the founders’ hearts, as well as having 5 brothers and 2 fathers between the pair, Ian tells us that bullying, anxiety, depression and ill-health had a big impact on his life in his early years. Doing good from cannabis played straight into the brand’s core values, and thanks to their dedication to supporting a worthy cause, sales have raised over £20,000 for CALM, supporting more than 2500 potentially life-saving phone calls. 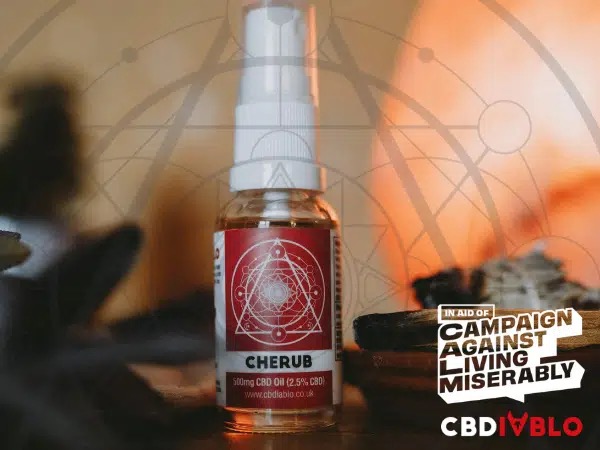 Mental health isn’t the only battle the brand has faced, like every other CBD company in the UK, the duo have had to face the challenges presented by the FSA’s decision to regulate CBD as a novel food. “We’d like to think that the industry is emerging from the confusion, but we still have doubts. There seems to be little consensus and a significant amount of political manipulation in the regulation of the cannabis industry. We have faith in our network of suppliers to help us achieve novel food listing, but we also see this as an opportunity for multi-million-pound conglomerates to come along and snap up the market with endless pockets. As two guys with a phone and a laptop each, we have no way to compete. We need to play to our strengths.”

Undeterred, both Ian and Sam plan to continue putting as much love into the brand and the products they produce, but do they have anything else in store? “In a recent conversation, somebody brought up the fact that ‘fortune favours the brave’ – we are in the process of developing a full-on recreational cannabis brand with huge aspirations. We are accumulating everything we’ve learned over the years and investing it with a larger team who work across the globe. Watch this space…”