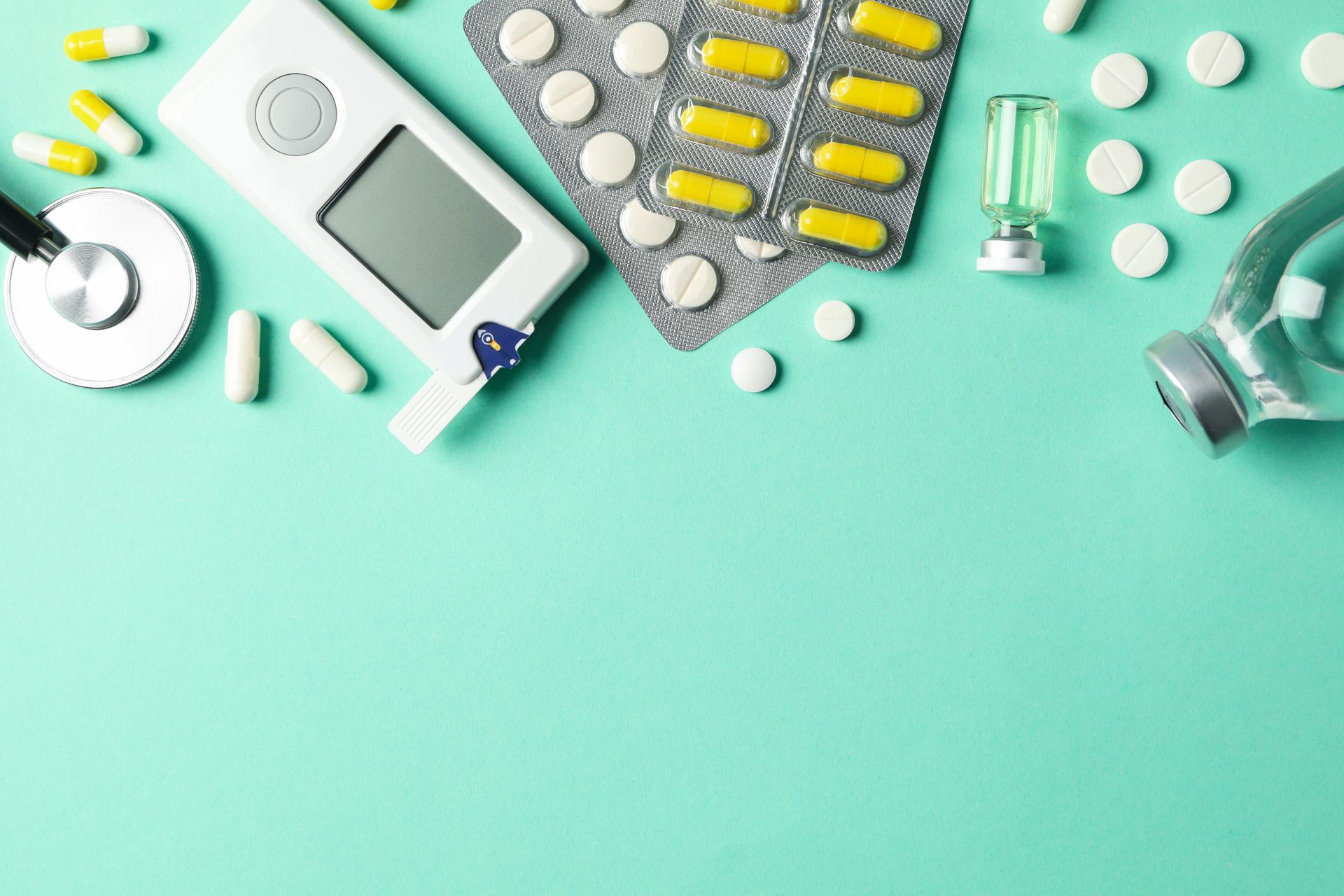 Could CBD help people with diabetes?

From a strictly prohibited substance to a so-called ‘miracle drug’, clinical and cultural interest in CBD is on the rise. As the data in favour of its healing power continues to trickle in, the list of the medical conditions in which CBD could offer therapeutic relief is only getting longer.

Some researchers even believe that CBD could help to manage one increasingly prevalent and potentially life-threatening condition: diabetes. The hard evidence is lacking, but the testimonials are there; could CBD really help people living with diabetes?

Diabetes is a chronic condition that affects blood sugar levels. It occurs when the body doesn’t make enough (or any) insulin, a hormone made by the pancreas that helps the body to break down sugar for energy. This results in the blood glucose levels being too high, which causes a range of uncomfortable symptoms, including:

Diabetes affects over 4.9 million people in the UK. There are two major types of diabetes, type 1 and type 2. Type 1 diabetes is a lifelong autoimmune condition where the immune system attacks the cells that produce insulin, meaning the body is unable to produce insulin. Around 8% of people with diabetes in the UK have type 1.

Type 2 diabetes is far more common; it accounts for over ​​90% of UK diabetes cases. With type 2 diabetes, the pancreas still releases insulin, but it either isn’t enough or doesn’t work properly. According to the NHS, you can manage type 2 diabetes with healthy eating, regular exercise and achieving a healthy body weight.

Without treatment, diabetes can cause serious complications, including damage to the heart, eyes, feet and kidneys. There is currently no known cure, but there are various treatments and medications that can help to manage the condition, such as insulin, alpha-glucosidase inhibitors, and biguanides.

Some researchers are even investigating the use of more natural remedies, such as CBD, in diabetes treatment.

Cannabidiol, better known as CBD, is one of over 100 naturally occurring cannabinoids found in the Cannabis sativa plant. Unlike the plant’s mind-altering molecule, tetrahydrocannabinol (THC), CBD is non-psychoactive, so it cannot get you high. CBD has therefore become a hugely popular health supplement amongst those seeking some of the medicinal benefits of whole-plant cannabis, without the intoxicating effects.

The therapeutic properties of CBD have captured the attention of researchers, with the cannabinoid now a recognised treatment for rare forms of epilepsy. CBD is even been studied as a potential treatment for anxiety and various inflammatory conditions.

CBD interacts with our body’s endocannabinoid system (ECS), a complex cell-signalling network that supports and coordinates several biological functions. By regulating our mood, appetite, sleep, pain levels, immune health, and much more, the ECS aims to maintain biological stability in the body.

CBD has been shown to indirectly modulate the activity of cannabinoid receptors in the ECS, CB1 and CB2, and subsequently alter the signalling of endocannabinoids, our body’s naturally-derived cannabinoids. It is thought that this then helps to support the vast array of biological functions coordinated by the ECS, which is why how CBD appears to have such widespread health benefits.

Can CBD help people with diabetes?

Since the ECS helps to regulate food intake and energy use, there is reason to believe that modulating this system could help people with diabetes. Although CBD is not currently an accepted treatment for diabetes, there is some preliminary research to suggest that it could help to prevent or manage the condition.

Authors of one review, published in Frontiers in Endocrinology in 2020, suggested that CBD could help to manage several factors that contribute to insulin resistance, type 2 diabetes, and its complications.

There are two prevailing theories for how CBD could help to prevent the onset of type 2 diabetes. Firstly, CBD has been shown to have potent anti-inflammatory properties. Since inflammation plays a major role in the onset of diabetes, it may be that CBD could help to reduce this risk. Several animal studies have even shown that CBD can reduce inflammation associated with diabetes complications, including cognitive decline.

There is also some evidence to suggest that CBD can assist in weight loss, and thus, may help those most at risk of developing diabetes to maintain healthy body weight. Obesity, inflammation, and diabetes are closely linked, so it’s certainly plausible that CBD could help to prevent the condition.

So far, only one study has investigated the effects of CBD on blood sugar in people with diabetes. The pilot study, published in 2016, aimed to examine the effects of both CBD and THCV, given either together or alone, on type 2 patients not taking insulin.

Although THCV appeared to be the more effective treatment, the researchers found that CBD decreased resistin, a hormone that can contribute to insulin resistance, and increased glucose-dependent insulinotropic peptide, a hormone that triggers the release of insulin. However, this did not have a significant impact on blood glucose levels, so more research is needed to assess the extent of these positive effects.

The American Diabetes Association (ADA) claim that CBD has “no noticeable effect on blood sugar…or insulin levels in people with type 2 diabetes,” but until more research is conducted, no solid conclusions can be made about the effect of CBD on diabetes – but that’s not to say it could help in other, more indirect ways.

Other benefits of using CBD

Some researchers believe that there are other ways in which CBD could indirectly benefit the lives of people with diabetes.

It’s estimated at 1 in 2 people with type 2 diabetes experience insomnia as a result of unstable blood sugar, fatigue, and frequent urination. Consequently, poor sleep and irregular sleeping patterns can put a person with diabetes at a higher risk of high blood sugar, it is important to prioritise getting better sleep to avoid further diabetes complications.

With increasing evidence in favour of using CBD as a sleep aid, it may also help people with diabetes to sleep longer and better and, in turn, help to stabilise blood sugar levels.

One long-term complication of having diabetes is neuropathy, or nerve pain, that commonly occurs in the hands and feet. This develops when nerves throughout the body become damaged as a result of high blood sugar.

Findings from research using animal models suggest that CBD can help to relieve neuropathic pain. Although the results are yet to be replicated in human trials, CBD is widely used to relieve aches and pains so may also benefit people with diabetic neuropathy. This could help people with diabetes to exercise pain-free and, in turn, help control blood sugar levels.

Due to chronic fatigue and health uncertainty, living with diabetes puts you at a higher risk of developing anxiety and depression. According to Diabetes UK, up to 40% of people with diabetes report having struggled with their psychological wellbeing since their diagnosis. And since stress hormones, cortisol and adrenaline, cause blood sugar levels to spike, it is important to prioritise stress relief as a way to manage diabetes symptoms.

Numerous studies have shown that CBD can help to relieve stress and anxiety. Not only could this massively improve the quality of life for people living with diabetes, but it could also positively impact blood sugar levels and symptoms of the condition.

Numerous studies have established that CBD is a safe and well-tolerated substance, even at high doses. Its side effects, such as appetite changes, nausea, and fatigue, are rare and mild. These effects are typically remedied with the correct dosage, so common guidance is to start low and build your dose up.

It is, however, important to consider that CBD could interact with some medications, particularly one diabetes drug, metformin. CBD and metformin are both inhibitors of a liver enzyme called CYP3A4, so combining the two could either increase or decrease levels of each drug in your bloodstream.

For this reason, always speak to a doctor or medical professional before adding CBD to your routine. If you do decide to take CBD alongside other medications, you can reduce the risk of drug interactions by spacing out your doses throughout the day or week.

As with most areas of CBD research, there is currently very little clinical evidence to support the use of cannabinoids to manage diabetes. This doesn’t mean that CBD won’t directly help, but researchers cannot say for certain that it will, or that it is entirely safe.

How to take CBD

When searching for a CBD product, either for yourself or a loved one with diabetes, it is important to look out for added sugar. CBD gummies, for example, are a hugely popular way to get your daily dose, but will likely have an effect on blood sugar levels. Instead, perhaps opt for a CBD oil that doesn’t contain any artificial flavourings.

There are countless ways to take CBD oil, each of which will typically fall into one of three categories: CBD isolate, broad-spectrum, and full-spectrum CBD. The major difference between them is the presence, or lack of, the entourage effect.

The purest form of CBD on the market is CBD isolate. It undergoes a specific extraction process to produce 99% pure CBD, without any other cannabis compounds.

Unlike CBD isolate, broad-spectrum CBD contains some other cannabis compounds but is without any THC. It may, therefore, have some additional health benefits due to the entourage effect. One thing to note, however, is that it’s not yet known whether other cannabinoids will have a direct impact on those with diabetes.

Full-spectrum CBD contains the whole-plant extract. In regions without restrictions on cannabis, full-spectrum CBD will include THC and, in turn, give the maximum entourage effect. However, in the UK, THC-containing products can only be obtained legally on prescription. Full-spectrum CBD products, therefore, contain negligible amounts of THC.

Research into the effects of CBD on diabetes is considerably limited, Whilst it may be beneficial to you or a loved one, particularly those with type 2 diabetes, the evidence is far from conclusive.

The ADA claims that CBD is “not an alternative to traditional diabetes management.” But that’s not to say that it can’t help to support your health and wellbeing in other ways which would, in turn, positively impact your diabetes symptoms.

To learn more about how to find high-quality CBD products, see our beginner’s guide to CBD.