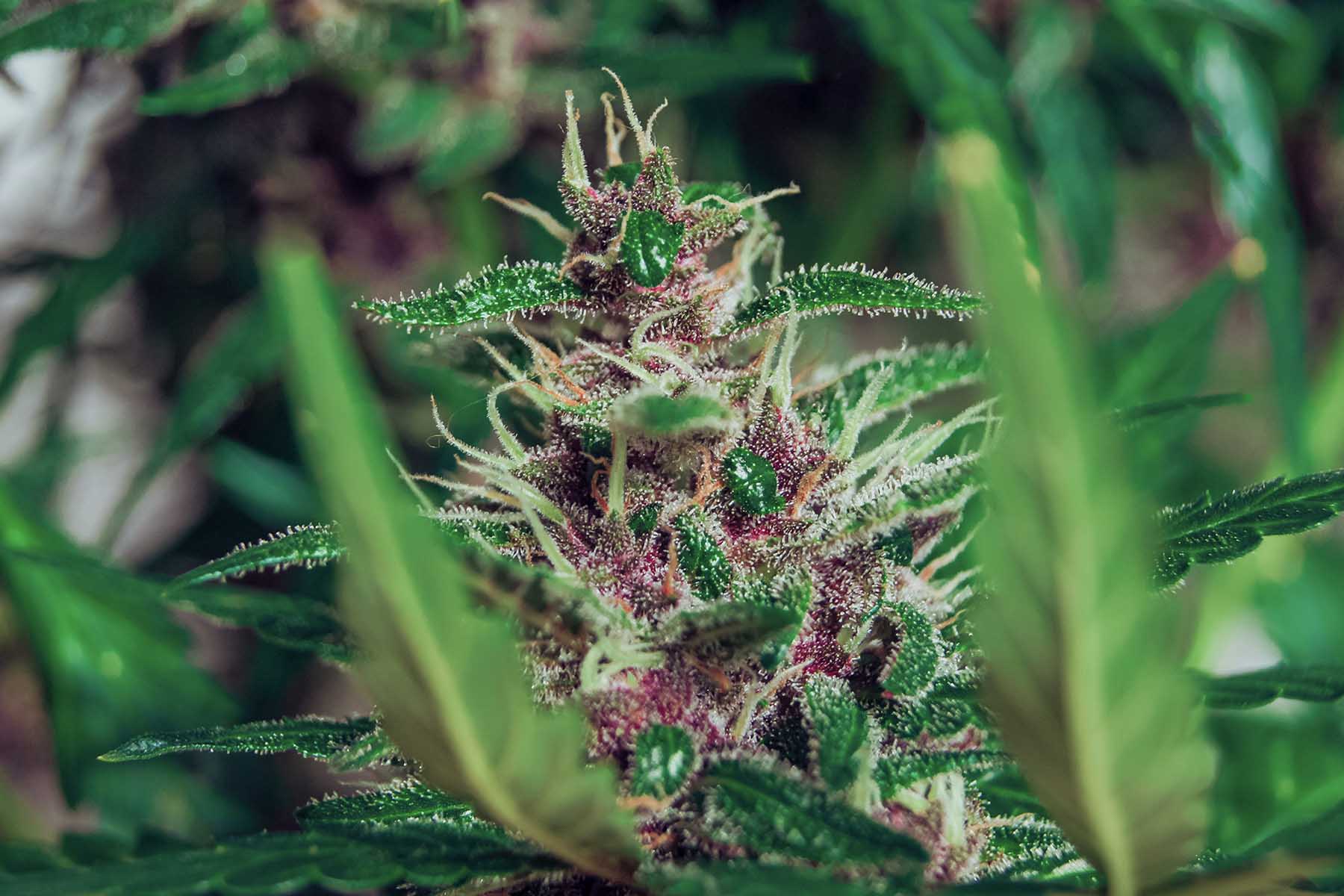 What makes cannabis smell so strong?

The cannabis plant has an unmistakable aroma. Ask any group what weed smells like and you’d likely be met with varied descriptions. “Earthy”, “herbal”, or “woody”, perhaps. Maybe even “musky”, “citrusy”, or “sweet”. One Reddit user even likened it to “cat piss and oregano” in their rather unique response to this very question on the r/NoStupidQuestions subreddit.

One comparison that seems to trump the rest, however, is “skunky”. But what exactly is it that gives the cannabis plant its unique odour? Researchers of a recent study believe that they know the answer, so let’s take a closer look at the science behind the smell.

In the UK, the term “skunk” is often used to describe a stronger, more potent strain of cannabis that circulates the illicit market. Since these strains have been selectively bred to contain high levels of tetrahydrocannabinol (THC), the plant’s mind-altering cannabinoid, it is often thought that THC is the culprit behind this skunkier-smelling weed.

This, however, is a myth. THC is odourless, so the plant’s concentration of THC doesn’t affect its smell. Whilst THC levels might indeed correlate with a strain’s stronger stench, this isn’t a causative association – but we’ll get to why this is later.

The cannabis plant contains a cocktail of unique compounds – cannabinoids, terpenes, and flavonoids, among them – which, when blended, create the distinct aroma of weed.

Although several compounds have already been identified as the major players in this, new research has revealed that a particular family of chemical compounds are likely to be responsible for that distinctive, skunky scent of the Cannabis sativa plant.

VSCs – the science behind the “skunk”

The study, published in the American Chemical Society in 2021, showed that volatile sulphur compounds (or VSCs) produce the cannabis plant’s signature skunk stench. The research team, led by Dr Iain Oswald, found that higher VSC levels were associated with a stronger smelling plant.

Within the sulphur compound family – which includes VSC1 to VSC7 – the VSCs containing the prenyl functional group (VSC3 to VSC7) are the compounds responsible for the plant’s characteristic smell, according to the study. Researchers even showed that VSC3 is the primary source scent, whilst the accompanying levels of VSC4-VSC7 either intensify or modify the overall aroma.

Although VSC6 and VSC7 have never been identified in any other plants, VSC3 is not a novel finding. Many will already be familiar with its intense, sulfuric smell – especially if you have ever smelt or drunk beer. Ever cracked open a bottle of Corona only to be hit with a strong stench of weed? Well, this is why.

Beer-making hops and cannabis are closely genetically related, with both Humulus lupulus (hops) and Cannabis sativa (cannabis) belonging to the Cannabinaceae family. Although not every pint has a weed-like smell, glass-bottled beer can have a particularly skunky aroma. This is because hops are light-sensitive; UV light causes a reaction that releases the chemicals responsible for its skunky odour. This is why the smell of Corona, in particular, is reminiscent of weed, especially if the bottle has been left out in the sun.

The researchers concluded that the results “shed light on the chemical origins of the characteristic aroma of cannabis” and that the study could even pave the way for new ways to tap into the plant’s health benefits.

No strain smells the same

VSCs are likely to be responsible for the underlying “skunky” scent that allows us to distinguish cannabis smoke from any other but, as many cannabis users will know, no two strains smell the same – but why is this?

We couldn’t possibly delve into the science behind the smell of cannabis without giving terpenes an honorary mention. Terpenes are aromatic compounds that contribute to the characteristic smell and taste of weed. Besides cannabis, these highly fragrant compounds are found in countless other plants and herbs, including lavender, pine, citrus fruits, basil, and much more.

Evolutionarily, these compounds are essential to the survival of the cannabis plant, as stronger aromas can help deter certain pests and predators. Terpenes can also help to protect the plant from the surrounding environment.

Many cannabis fanatics will understand the importance of terpenes in their preferred cultivar and how it smells. Terpenes are responsible for the subtle differences in the smells of a particular strain and whether it’s “woody” or “citrusy”, for instance.

But terpenes don’t just contribute to how weed smells. Countless studies have shown that many terpenes possess notable health benefits, with antimicrobial, antifungal, antiviral, anti-inflammatory, and pain-relieving properties, which many researchers believe enhance the therapeutic value of cannabis.

They may also contribute to the differences between the smell of Indica and Sativa cannabis varieties. Cannabis indica, known for its more mellow high, has a more skunk-like smell, whereas the more stimulating high of the Cannabis sativa plant is characterised by a sweeter, herbal aroma – likely due to their different terpenoid profiles.

Other factors that influence how weed smells

Almost every aspect of cannabis cultivation contributes to the scent that characterises the end product – and many things can go wrong in the process to prevent strains from being as fragrant as possible. So let’s take a look at the factors that can influence the plant’s chemical makeup and its resulting odour.

The age of the plant when it is harvested is a major contributor to how cannabis smells. Cannabis that grows older before it’s dried and cured will have a more pungent odour, whereas cannabis harvested earlier in its life cycle will have a milder scent.

According to the above study, no VSCs can be detected in the cannabis plant until the seventh week of growing. After this, VSC levels rapidly increase, which has shown to correlate with “an intense rise in the pungency of the skunk-like aroma”. And since increasing the duration of the flowering period also increases THC content, as one study has shown, this may be why more potent cannabis, or “skunk”, has that stronger smell.

When the curing process goes wrong

If weed doesn’t smell quite right, it’s likely that something went wrong during the curing process – one of the final steps of cannabis cultivation that is essential to its preservation. For example, if cannabis has a harsh, ammonia scent or smells like freshly-cut grass, it’s likely that it hasn’t been completely cured.

How old the weed is

Does cannabis get better with age? Unlike fine wine or cheese, it seems that the older weed is, the less fragrant it becomes. According to the authors of the 2021 study, “samples with older product ages tend to have lower VSC concentrations.” The study found that VSC levels were nearly 3x higher in cannabis tested four days after packaging than cannabis tested after 46 days and, thus, had a weaker odour.

Not everyone likes the smell of weed. Despite UK law now recognising cannabis as medicine, its distinct scent still carries negative connotations – possibly upheld by a stream of articles in local newspapers encouraging you to grass up your neighbours if you smell weed from their home.

In 2016, the College of Policing issued guidance saying that the smell of cannabis was no longer a good enough reason for a stop and search. So, for those who deem its odour offensive, guidance should not be to report the user. Instead, it should be – for lack of a better term – to mind their own business.

Though for the cannabis users who wish to reap the benefits of this plant more discreetly, one Canadian startup, CannabCo, claims that their “advanced cannabis technology” can eliminate the distinct odour of the plant. This “odourless cannabis” is said to have “reduced harshness” but allegedly retains the properties of full-spectrum cannabis flower.

Though this has been met with some criticism. “It seems like a gimmick to me,” says Peter Grinspoon, board member of the advocacy group Doctors For Cannabis Regulation. “Terpenes are such an important part of the enjoyment recreationally, as well as the medicinal properties,” Grinspoon says, but CannabCo does not disclose how their technology impacts the levels of terpenes in the plant.

The smell of cannabis may not be for everyone, but is there a future for odourless weed in the cannabis market? Most users would agree that its pong is what makes it so unique, so perhaps not.