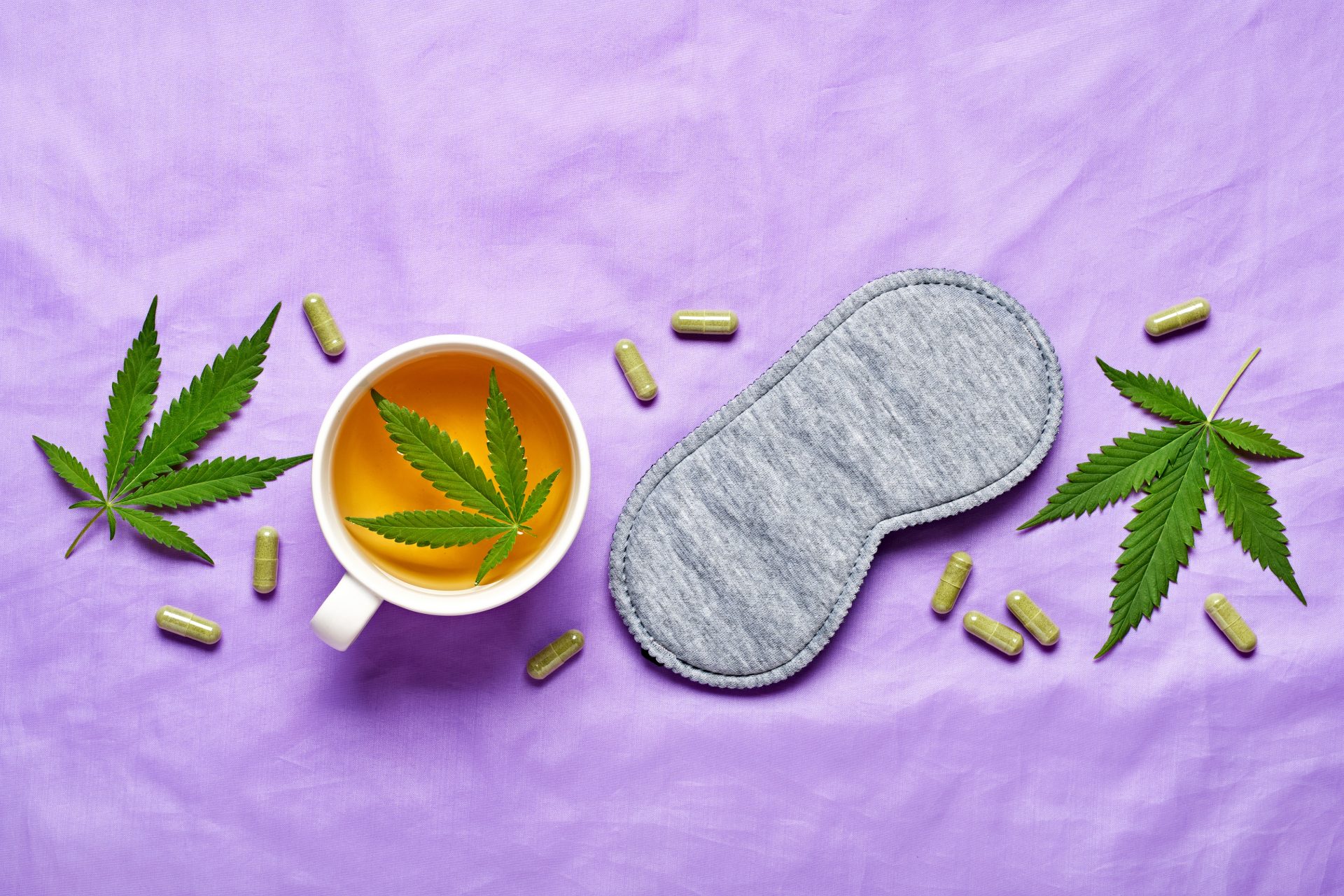 Scientific interest in cannabis is at an all-time high. There’s a vast amount of circulating information about cannabis and sleep, and whilst the science isn’t hugely conclusive, many believe cannabis to be an effective, natural sleep aid.

The events of the last two years haven’t exactly been conducive to a good night’s sleep. With over two-thirds of UK adults having trouble sleeping, could cannabis be the answer?

The ECS and sleep

The intriguing relationship between cannabis and sleep can be accredited to the endocannabinoid system (ECS), a complex cell-signalling network that supports and coordinates a number of biological functions. The ECS is our body’s universal regulator; it maintains biological stability (or homeostasis) by regulating our appetite, mood, memory, pain, and much more – including our sleep.

The ECS is made up of cannabinoid (CB) receptors and endocannabinoids, also known as endogenous cannabinoids. These are two compounds, anandamide and 2-Arachidonoylglycerol (2-AG), that are produced by the body to modulate the nervous system and the immune system through the activity of CB1 and CB2 receptors.

Cannabinoids are naturally found in plants and are particularly abundant within the cannabis plant. By binding to CB1 and CB2, these plant-derived can also influence endocannabinoid signalling.

Due to the continuous balance between rest and wakefulness, sleep cycles are a primary example of homeostasis. As both the quantity and quality of our sleep are influenced by ECS activity, cannabinoids can have a pronounced effect on how well we sleep.

The cannabis plant is full of active ingredients. When we hear about its therapeutic power, CBD and THC tend to steal the spotlight, but there are other important botanicals that may also influence our sleep – but we’ll get to the nitty-gritty science later.

The sleep-promoting effects of cannabis have been documented for centuries. Sir J. Russell Reynolds, a British neurologist and physician, utilised the plant for medical purposes in the 1800s. Reynolds wrote in the Lancet in 1890 about his use of cannabis tinctures as an effective sleep aid in patients, commenting that these tinctures were particularly useful for “senile insomnia”.

More recently, scientists have begun to investigate the role of cannabis as a sleep aid. Anecdotally, it is widely documented that cannabis can improve sleep, with 50% of long-term users reporting doing so to help them sleep. Several clinical studies corroborate these reports. One study of 147 medical cannabis users, published in 2011, found that cannabis significantly reduces the time it takes to fall asleep, in both insomnia patients and in patients with non-sleep-related ailments.

Other research suggests that cannabis could help to improve the symptoms of insomnia or reduce sleep disturbances in people with chronic pain and neurological conditions, such as multiple sclerosis. It has therefore been suggested that cannabis could be used as a natural sleep aid.

Since the discovery of the ECS in 1988, researchers have endeavoured to understand how cannabis interacts with this dynamic system. There’s still a lot that scientists don’t know, but they have offered several theories for how cannabis generates its sleep-promoting effects.

The CB1 receptor is highly involved in promoting both sleep and wakefulness. When activated by anandamide, CB1 is thought to stimulate the release of adenosine in the brain, a neurotransmitter involved in the onset of sleep.

Cannabis-derived cannabinoids act in similar ways to endocannabinoids. They can, therefore, supplement the ECS and influence our sleep. Let’s take a look at the plant’s two major cannabinoids, CBD and THC, and how they might promote a good night’s sleep.

Tetrahydrocannabinol (THC) is the mind-altering molecule in the cannabis plant. It is responsible for the characteristic high that smoking or consuming cannabis causes, primarily through the activation of CB1 receptors in the brain.

THC directly activates these receptors, which has sedative effects. Experimental studies have found that THC can increase the time spent in slow-wave (deep) sleep and reduce REM sleep, which also reduces dreaming. For this reason, it has been proposed that THC could benefit people living with post-traumatic stress disorder (PTSD), to reduce the frequency of trauma-related nightmares.

Cannabis can also have a more indirect effect on our sleep. For example, THC has been shown to modulate pain pathways in the spinal cord and brain. It can therefore be used as an effective pain relief, which may be able to reverse pain-related sleep disturbances.

Cannabidiol (CBD) is a non-psychoactive cannabinoid; it cannot get you high. For this reason, CBD has become a hugely popular health supplement for those seeking some of the therapeutic benefits of cannabis, without the intoxicating effects.

Unlike THC, CBD has a more indirect mechanism of action. It inhibits the activity of the FAAH enzyme, which is responsible for metabolising anandamide. By preventing its breakdown, CBD can enhance the signalling of anandamide which, as mentioned earlier, is involved in the onset of sleep.

Stress and anxiety can be detrimental to our sleep. According to a survey by Anxiety UK, 82% of people report anxiety being the primary cause of their poor sleep. CBD shows huge promise in the treatment of anxiety disorders, so by helping us to de-stress and relax, CBD (or high-CBD cannabis) could help to stop our thoughts racing when trying to drift off.

For the aforementioned reasons, some people choose to improve their sleep with CBD alone. However, when taken together, CBD and THC have been shown to have a synergistic relationship. This is known as the “entourage effect”; effectively, cannabis compounds work better together, so let’s delve into some of the other unsung heroes of this plant.

There has been far less research conducted into other components of the cannabis plant, but several cannabinoids have also been shown to possess therapeutic properties. In particular, cannabinol (CBN) is said to have sedative effects, particularly when administered in combination with THC, but “there is insufficient published evidence to support sleep-related claims”, according to research published in Cannabis and Cannabinoid Research in 2021.

Cannabis also contains over 150 aromatic compounds called terpenes, which give the plant its characteristic smell and taste. Several terpenes – myrcene and caryophyllene, in particular – have been shown to promote relaxation and support sleep, so the plant’s terpene blend may be just as important as the cannabinoid content when it comes to improving our sleep.

Now for the confusing part. Several studies have noted that cannabis can have the opposite effect on our sleep – that is, cause sleep disturbances. The existing evidence suggests that heavy cannabis users experience the extremes of sleep duration; they are 64% more likely to sleep for less than 6 hours, and 76% more likely to sleep more than 9 hours. Other research suggests that heavy cannabis use results in shorter sleep duration and less time in slow-wave sleep than non-users.

Why is this? CBD and THC are biphasic, meaning they have opposite effects at low and high doses. In particular, CBD appears to promote wakefulness at lower doses and sleep at higher doses, whereas THC has stimulatory effects at high doses. This would explain why high doses of THC, or high-THC/low-CBD cannabis, can disturb sleep instead of improving it.

Other negatives of using cannabis as a sleep aid include the risk of tolerance to its sleep-inducing effects with long-term use. Similarly, some people may develop a psychological (not physical) dependence on cannabis and not be able to sleep effectively without it. Further, high doses of THC can lead to daytime sleepiness the following day.

The effects of cannabis on sleep are likely to be dependent on multiple factors: the dosage, the frequency of use, the timing of the dose, the ratio of CBD:THC, and the presence of other plant compounds, such as terpenes.

In particular, the strain of the plant will have a pronounced effect on how it impacts our sleep. The two most common cannabis strains are Sativa and Indica – the former being more stimulating, and the latter more calming and relaxing. There is no general consensus about which strain is ‘best’, but the Sleep Foundation suggest that Indica may be better for sleep, whereas Sativa may be better for those who wish to avoid nightmares.

Far more research is needed to pinpoint the complexities of the science. The truth is, scientists can’t say exactly how cannabis will affect our sleep. Whilst it may be the key to a good night’s sleep for some people, particularly those living with chronic pain, insomnia, or anxiety, it won’t be a useful tool for everyone.

If cannabis can help to improve the symptoms of sleep disorders, as research suggests, it’s certainly much safer than existing medications. For example, opioids and over-the-counter sleep aids come with a risk of tolerance and dependence, whereas cannabis has very few side effects and has a very low potential for abuse.

However, it is important to consider the legal restrictions around THC. In the UK, CBD is legal, but THC containing products can only be obtained legally on prescription. CBD products (containing less than 1mg THC per container) are available to buy online and in health stores. According to Cannabis Access Clinics, medical cannabis prescriptions are only given to people living with insomnia if it is comorbid with chronic pain, so it might be worth speaking to a medical cannabis clinic to see if you’re eligible for a private cannabis prescription.

Outside of the UK, your regional THC restrictions may be different, so it’s always important to do your own research. And be sure to consult your doctor before making any changes to your treatment plan or changing any medications.